Thingvellir National Park is a UNESCO World Heritage Site located less than 1 hour east of Reykjavik, Iceland’s capital city.
The park is packed with walking paths, breathtaking landscapes and historical landmarks that promise to offer something for everyone, from nature lovers to history enthusiasts.

It is safe to say that you can’t visit Iceland without including a stop in the park, which can easily be integrated in your Golden Circle day.

Silfra is a fissure that opened up in 1789 following a major earthquake, which caused the North American and the Eurasian tectonic plates to drift apart. Today, Silfra is one of the most popular sites to visit while in Iceland, whether you are a diver or not.

Located in the heart of Thingvellir National Park, Silfra is the only one of several tectonic cracks that is filled with glacial water, flowing from the nearby Langjökull glacier. And this feature is what makes it special and a bucket-list dive site for many.

However, not everyone comes to Iceland to dive Silfra and one may wonder what to do while our family and friends are taking a dip in this unique dive site. That’s easy!

The Hakið Visitor Center is a great starting point to visit all the popular landmarks that are within walking distance from Silfra. The visitor center is located on an elevated hill and therefore offers a great viewpoint platform, from which you can observe the whole National Park and its points of interest.

Three walking paths depart from the visitor center and they will take you to the various attractions. You can see a map of the trails here. These maps are also available at the Hakið Visitor Center for you to pick up.

Here are the landmarks you can visit in the park.

Walking north from Hakið the first landmark you will encounter is Lögberg, which literally translates to the Law Rock.

This is a very important historical site for Iceland, as it was the center of Althingi, the Icelandic parliament. Founded in the year 930, Althingi is believed to be the longest running parliament in the world and, from the time of foundation until about 1800, the legislative assembly (Lögretta) used to reunite here.

Lögberg was the site where all major legal actions took place, where the news were spread and where anyone could step forward to make announcements or law propositions.

The Icelandic Sagas later depicted and brought to life many of the important events that took place here.

Interesting fact about Lögberg: its location is not entirely confirmed. Some say the assembly point was exactly where it is indicated now by the flagpole. Others sustain that it was further up the walking path. Archaeologists and historians are always trying to pinpoint the exact location but it is now clear that we might never know…

Further up the walking trail we find Öxarárfoss, one the most popular waterfalls in Iceland. Despite being less than 20 meters high and not having a massive volume, this waterfall carries a lot of historical value, just like the rest of Thingvellir National Park.

The flow rate of the river that feeds the waterfall changes from season to season, which results in the waterfall volume to change through the course of the year. In winter the waterfall often freezes over completely, creating an unforgettable view. The ice and snow deposits in and around the waterfall also contribute to creating a mesmerizing scenery. 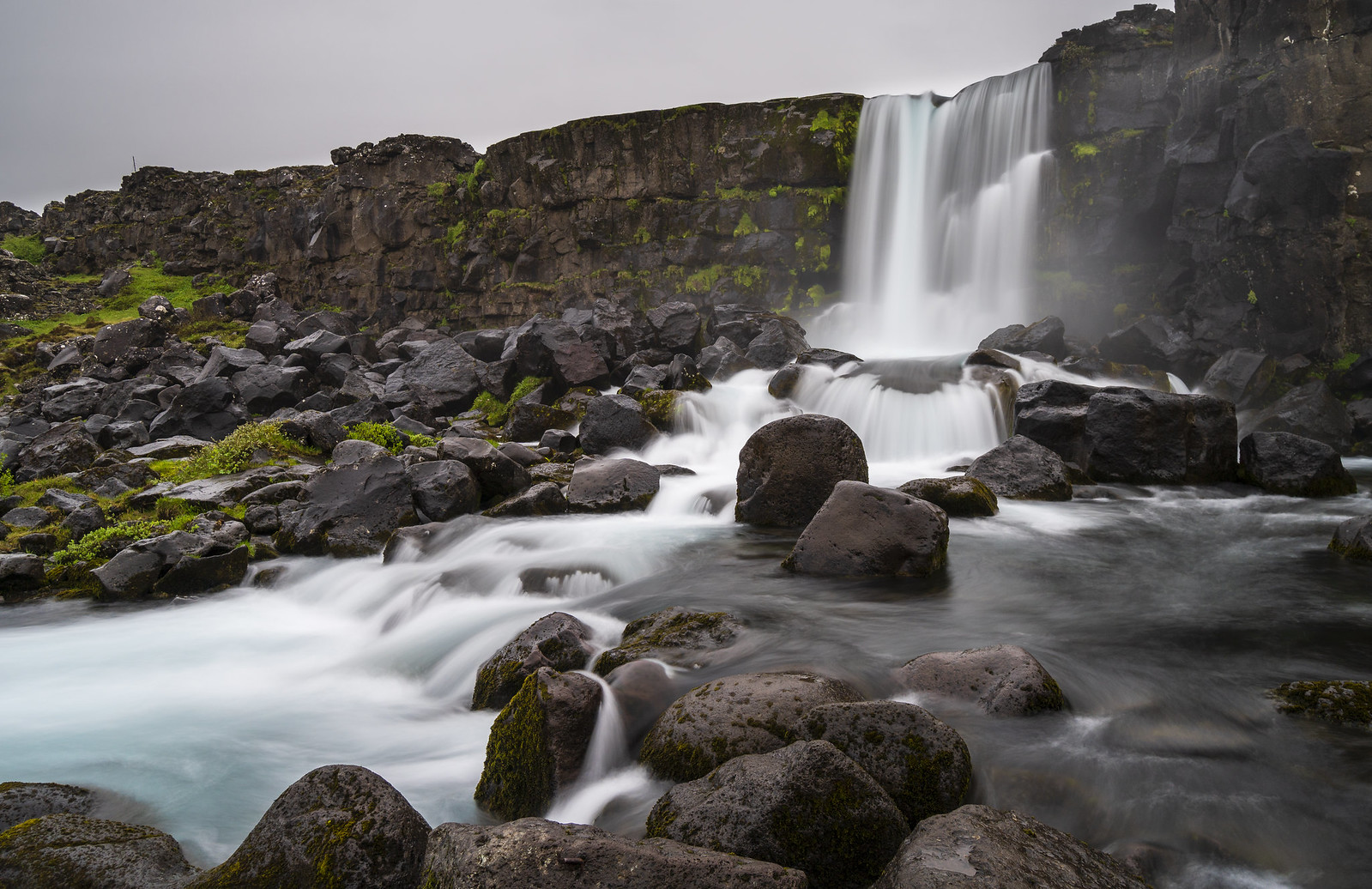 After visiting Öxarárfoss, you can follow the walking platform to parking lot P2 and further down until you reach Þingvallakirkja, or Thingvellir church.
The church was built around the year 1000, shortly after Iceland accepted Christianity after several failed attempts. The wood and bell were sent as a gift to Iceland from the King of Norway, Olaf the Stout.

The original church was located in exactly the same spot as today, but it was probably much larger than the present one, as the parliament used it as an assembly point when the harsh Icelandic weather didn’t allow to meet outside in the open air.

The church we see today was consecrated in 1859 and renovated several times until the early 1900s. It is important to note that the church is currently in use and it is only open from May until September.

Right next to Þingvallakirkja we find Iceland’s prime minister’s summer residence. This traditional house is mostly used for official receptions and diplomatic visits.
In front of the residence and the church is the State Cemetery, reserved to tumulate national heroes.

From the church, you can get back on the walking path and easily reach Silfra, where your travel companions will probably be almost done with their diving or snorkeling tour.

The landmarks listed in this guide are the most popular ones in the national park. However you will notice several signs on the paths that will conduct you to other lesser-known attractions.
If the weather permits, you can easily spend a couple of hours walking around the park, where you will find several spots worthy of a stop, not to mention the beautiful locations you will walk through and that you will want to capture with your camera.

There are several parking lots in the park. The parking fee can be paid on site upon arrival at any of them and it is valid for 24 hours in all lots. This is quite convenient, as it allows you to move your car freely. Other than this, the entrance to the park is free of charge and possible at any time of day of night. Be aware that there is no artificial lighting in the park, except at the church and prime minister residence.

The parking lot closest to Silfra is parking P5, while the Hakið Visitor Center is located at parking lot P1. Both lots are convenient starting points to explore the park following the walking trails.

next3 days in Reykjavik